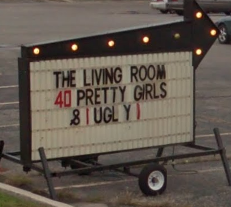 Here's a strange one.  The Living Room is a strip club in Harrison Township, Ohio.  They make a lot of their profits from drinks purchased by customers for their dancers.  When one of those dancers caused a drunk driving accident injuring a couple in 2010, the couple sued both the dancer and the Living Room, alleging that they were encouraging their employees to drink on the job. (Montgomery County Case No. 2010CV08476).

The owner of the club had argued that just because the club encouraged their dancers to drink, that doesn't make the club responsible when they drink and drive.  The jury wasn't buying that nonsense, and held the club accountable for the accident.  On June 24, 2014, the Ohio trial court judge upheld a jury verdict of $2.85 million against the dancer and the club.

Now here's the odd part.  (I know.  You're thinking, "We're not to the odd part yet?")  The attorney for the club has said that the club has no intention of changing the Living Room's policy of encouraging his dancers to drink on the job.  According to the owners, over 50% of the clubs profits come from the drinks bought for the dancers, and that is too good a payday to pass up.

The dancer who caused the crash got six months in jail for DUI and vehicular assault charges.